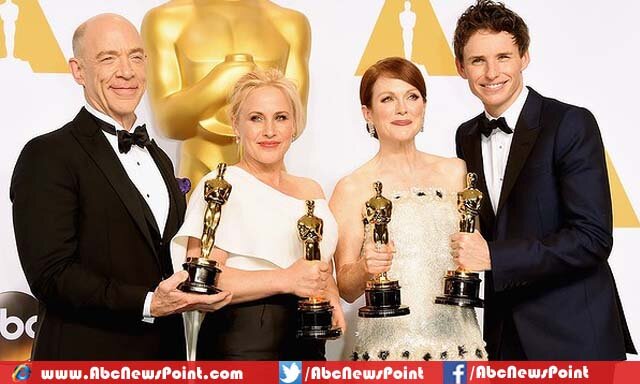 The 60-year-old veteran American actor named the Oscars in best supporting actor category as he higly-acclaimed for his spectacular performance in Whiplash.

Simmons first time nominated for Oscar despite playing super characters in his whole career but he also sacked Golden Globe in January,.

He nominated with other experienced stars in this categgory as Ethan Hawke for ‘Boyhood’ Mark Ruffalo for ‘Foxcatcher’, Edward Norton ‘Birdman’ and Robert Duvall ‘The Judge’.

The live coverage of 87th Academy Awards had televised via the Dolby Theatre in Los Angeles’ ABC and event hosted by Neil Patrick Harris in which Simmons’ name was announced for best supporting actor winner.

Arquette also received this biggest achievement first time but her name was called in winner of Golden Globe awards in January.

The experienced Arquette beat the other nominees in this category as Emma Stone- ‘Birdman’, Laura Dern- ‘Wild’, Keira Knightley- ‘The Imitation Game’ and Meryl Streep- ‘Into the Woods.’

Some unknown people stormed car of Bangladesh’s main opposition leader on Monday during an election [...]

American hottest beauty Angelina Jolie, who started her career with Voight's Lookin' to Get Out 1982[...]

O my God! Kardshaians- Jenner’s sexiest acts stun everyone as these gorgeous ladies every times come[...]

Millions’ heartthrob sexiest Kim Kardashian who has become one of the favorite celebrities of pe[...]

The 13-year-old student at school in Barcelona, city in Spain, killed one of his teachers while usin[...]

Air Strike On Scud Missile Base In Yemen, Died Over 45 And 400 Injured

An air strike was done by Saudi-led campaign on a Scud missile base in the Houthi-controlled capital[...]

Rome: The authorities reported that a vessel which was on way Europe with a large number of migrants[...]